Older analog engine timers do not contain a timekeeping oscillator such as a pendulum or balance wheel, but instead counts the oscillations of the AC utility current from its power source to keep time. It consists of a small AC synchronous motor, which turns the clock’s dial through a reduction gear train.[9] The motor contains electromagnets which create a rotating magnetic field which turns an iron rotor. The rotation rate of the motor shaft is synchronized to the utility frequency; 60 cycles per second (Hz) in North America and parts of South America, 50 cycles per second in most other countries.

âThe frequency of the transmission system was, is and will be never stable at exactly 50Hz or 60 Hz for a reasonable amount of time, either leading or lagging depending on the generation, loading and other conditions of operation of the transmission system. The following regulations apply : Short term +3%/â5% frequency variation range and normal Â±2% frequency variation range as defined by
IEEE C50.13 and IEC 60034-3 .â 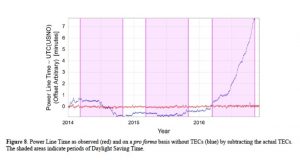 The over 7-minute time error that would have developed in electric clocks over much of N. America had they not been reset after the March 2016 switch to Daylight Saving Time, and had TEC’s not been utilized[1]. The Grid line frequency and voltage is also affected by large motors and generators in plant. Many plants see brown outs and surges regularly.

Quartz clocks are electric clocks which keep time by counting oscillations of a vibrating quartz crystal. They use modern low-voltage DC-powered circuitry, which may be supplied by a battery or derived from mains electricity. They are the most common type of clock today. Quartz clocks and watches as supplied by the manufacturer typically keep time with an error of a few seconds per week, although sometimes more.[1] Inexpensive quartz movements are often specified to keep time within 30 seconds per month (1 second per day, 6 minutes per year).[2] Lower error can be achieved by individual calibration if adjustment is possible, subject to the stability of the oscillator, particularly with change in temperature. Higher accuracy is possible at higher cost.

For example, if the incoming power of the mechanical clock was coming in at an average of 59.8 Hz, there is a calculation that can be made to determine the amount of âlossâ that is occurring due to a lower mean frequency. 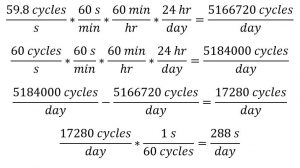 Assuming a full year of this same loss, 29.2 hours of time would not be counted.

Quartz counts will lose about 6 minutes of counting on average per year.

This website uses cookies to improve your experience while you navigate through the website. Out of these cookies, the cookies that are categorized as necessary are stored on your browser as they are essential for the working of basic functionalities of the website. We also use third-party cookies that help us analyze and understand how you use this website. These cookies will be stored in your browser only with your consent. You also have the option to opt-out of these cookies. But opting out of some of these cookies may have an effect on your browsing experience.
Necessary Always Enabled
Necessary cookies are absolutely essential for the website to function properly. This category only includes cookies that ensures basic functionalities and security features of the website. These cookies do not store any personal information.
Non-necessary
Any cookies that may not be particularly necessary for the website to function and is used specifically to collect user personal data via analytics, ads, other embedded contents are termed as non-necessary cookies. It is mandatory to procure user consent prior to running these cookies on your website.
SAVE & ACCEPT